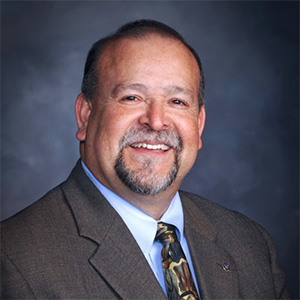 Mr. José Octavio Guillén started his justice system career in 1975 as an entry clerk for the Los Angeles Superior Court. He later became a Deputy Sheriff for Los Angeles County and then returned to the court as a courtroom clerk and thereafter, promoting to leadership positions up to District Chief.

In 1990 he became the Court Administrator for the Beverly Hills Municipal Court and joined NACM and became an active member and served on its Board of Directors. From 1995 until his retirement in 2017, he served as Court Executive Officer for four California Counties, Napa, Riverside, Imperial, and Sonoma, as well as served as Trial Courts Director for the Administrative Office of the California Courts for a brief period.

In addition to his 42 years of justice system experience and leadership, he has also shared his court administration expertise as a subject matter consultant for various international justice reform projects since 1992, including in El Salvador, Guatemala, Honduras, Nicaragua, the Dominican Republic, Ecuador, Colombia, Mexico, Puerto Rico, and Afghanistan. After retiring, he and his business partner started an organizational development consulting firm, Guillen & Merrill, LLC, providing a wide range of leadership and management training, education, and development services.